Four times a year a group of writers from all over the Midwest and beyond gather to share writing and marketing tips. Often agents and editors are invited to share their expertise and take pitches from aspiring authors. The conferences are free to members, save the motel fee and food costs.

My first time at a conference was in the summer of 2007. I’d “completed” PLEASE SAY KADDISH FOR ME and was interested in finding an agent. I really didn’t expect to find anyone in an organization with the word Ozarks to be interested in my Jewish historical novel.

How wrong can a person be? I found not only interest but a group of generous mentors. Each time I went to a workshop, I learned something new which precipitated a rewrite. One of the most significant classes was on how to pitch a book to an agent in five sentences.

Jeanie Loiacono and Me 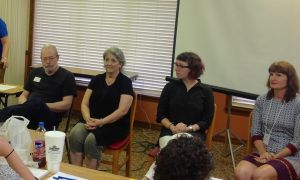 Over the years I’ve made some good friends and met people who have been instrumental in changing my life. The first is Lou Turner, founder of High Hill Press. In 2010, after I’d submitted short stories to ECHOES OF THE OZARKS and VOICES, two OWL publications, she invited me to compile my own anthology for HHP. In the process I learned a lot from her short story editor, Delois McGrew.

I’ve had the opportunity to pitch to and be turned down by a few agents until I met Jeanie Loiacono at the May 2012 conference. She now represents my two novels and is reading my third.

When I joined OWL in 2007 I was in awe of the authors with their tables. Now in 2016 I’m blessed to have three books of my own and one on the way.

Visiting old friends and meeting new ones made for a pleasant weekend. I was thrilled to see Lou and Delois. Jeanie was also one of the speakers. Hugs all around. 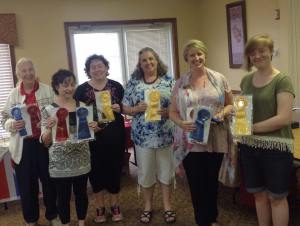 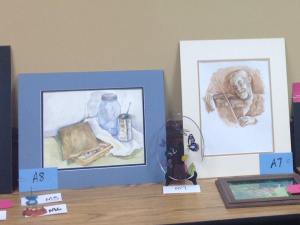 My paintings took first and second place in the annual art contest.

Alex Hess, an editor from Skyhorse Publishing in NY spoke to us about the ever changing face of the publishing industry. I hope to implement some of her suggestions on using social media in the not too distant future.

President of OWL, Diane Yates, asked the two biggest hams in the group to open Friday night with entertainment. Ronda Del Boccio captured us on video.

12 comments on “Conferring with OWLs”